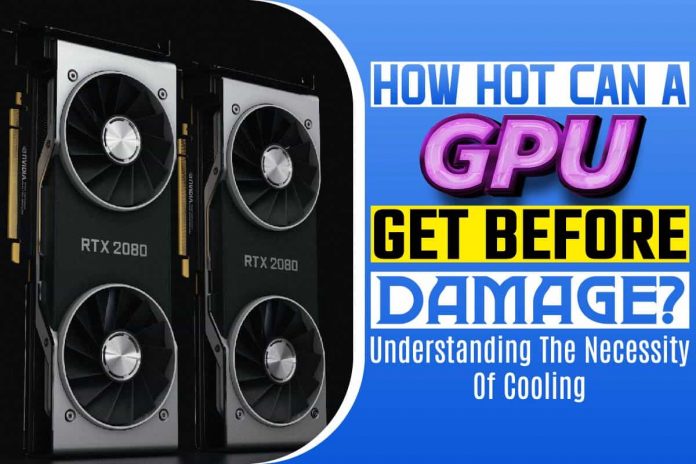 How Hot Can A GPU Get Before Damage? Understanding the Necessity Of Cooling

Did you know that your GPU does not need a fan to work? You can get the GPU to work without a cooling system as long as you have other components. The only problem is that it will generate a lot of heat and get damaged.

But how much does it take to overheat a GPU? How much can it take before the heat finally damages your GPU? Let us break this down and see how you can prevent it from happening;

How Hot Can A GPU Get Before Damage?

Most manufacturers, including AMD and NVIDIA, put the maximum temperature rating for their GPUs at between 900C and 950C. Some extreme models go up to 1000C, but standard GPUs will give out at 800C.

Anything above this temperature will damage the GPU beyond repair. Even if the damage is not immediate, it will slowly reduce its performance, and your GPUs lifespan will decrease significantly. So the best thing to do is always have a cooling system working to keep the temperatures as low as possible.

Tips On Keeping Your GPU Cool

When it comes to GPUs or any other computer components, low temperatures are always a good thing. A GPU is expensive, and it has many sensitive parts that could easily get damaged by heat.

In addition to this, the GPU performs highly complex operations that need a lot of power. This high power supply and incredible processing capabilities come at a cost, the heat generated. You notice that a GPU has enormous fans to keep it cool.

Sometimes, you could perform heavy tasks on your PC, and the graphics card’s cooling system is not enough. Here is a guide on a few tips you can use to cool down the graphics card o it works better;

For older Graphics cards, you can change the thermal paste. You can use alcohol pads to clean off the aged thermal paste before you use the new one. Thermal paste links the GPU to a heat sink, which means bad paste won’t release heat from the processor.

Dust could hinder heat transmission from your GPU; thus, removing it will make heat loss more effective. A clean fan will also run better than one with dust in it so that it will keep your fans cooler.

What Damage Does Excess Heat Do To Your PC?

Every computer expert or newbie will tell you that heat is bad for your PC. If you get professional advice when building a PC, there will be an emphasis on the cooling system. So what is the fuss about? What does the excess heat do to your PC?

Numerous issues arise due to poor heat management, but we can break them into three major issues.

All of these issues could potentially cause your PC to stop working, so let us break it down and see the details;

1. The heat will lower electrical resistance in the conductors and semi-conductors in your PC

You might think that reduced resistance is a good thing, but it is not. The power supply unit is calibrated to account for the resistance.

This means that the current your PSU sends is enough to power the component despite resistance. So when the resistance is reduced, the parts will get more power than they should have, which could be a problem for you.

More power means that there will be even more heat in the system, which will worsen the damage. For sensitive components, a small increase in current could fry them and render your PC useless.

2. It will reduce the performance of your PC

The high temperatures could damage some components of your PC. The PC could still work, but it will not work as well as before without the excess heat-damaged support systems.

The motherboard has heat sensors installed in it to protect the components. These sensors can make the PC shut down, and the shutdown will be more prevalent with a damaged system. All PCs have this self-preservation system to keep them working.

The motherboard will slow down your PC’s components when the temperatures go up to cool down.

Too much heat could damage the sensors, so this safety measure will not be deployed, and your PC will get damaged.

3. It will increase the degradation of electrical pathways

Electrical pathways in your PC components move the data around, which can be affected by high temperatures. These networks will wear out over time, but working with hot environments will speed it up.

Over time, the pathways will get mixed up, affecting data movement in your components. This will cause corruption of data, loss of files from storage, and numerous other performance issues.

Any PC that has been in use for many years might develop these issues due to old age, but it is more prevalent in overheating PCs.

In a few years, you might have these issues with a poorly cooled PC but use a cool PC for decades without going through this.

In cases of extreme heat, the low-temperature solder used on the components could melt due to high temperatures.

This will cause the parts to fall apart, and I don’t need to tell you what happens to your PC then.

Cooling is important since high temperatures can damage everything in your PC from the RAM, CPU, processor, and many other components. A poorly cooled PC will always have low performance, but just how much heat can your PC survive?

For most PCs and GPUs, this temperature ranges between 800C and 950C. Some high-end hard disks cannot handle temperatures higher than 700C since they will lose user data. So why is temperature control so crucial in PCs?

Most PC components don’t have moving parts that depend on high-performance lubricants to keep them cool.

They, therefore, don’t have an optimal operation temperature which means that you need to keep them as cool as possible.

This is why for most components, a maximum temperature is specified while a minimum is not. Having said this, you should keep the PC at room temperature.

This is because condensation will occur if the PC is cooler, and water droplets will fall onto your components.

This will be a more significant concern since water is worse for your motherboard than high temperatures.

Too much temperature will reduce the performance and lifespan of your PC, but water will damage it in a matter of minutes.

It would help if you matched the temperature to prevent overheating while checking condensation.

This is why air cooling systems are a good choice; they pass air through the components so that the temperature of your PC always matches that of your surroundings.

To be safe, you need to work with the figure your PC’s manufacturer provided for you. Keep in mind that the manufacturers produce these numbers while thinking about the largest population and how they use their products.

This means that an overheated system will not work as well as a cool system. In addition to reduced performance, an overheated PC will have a shorter lifespan and might produce corrupted data.

To stay safe, make sure you always keep the temperature of your GPU as low as possible. Lower temperatures will give you higher performance, a longer lifespan, and a better user experience.

How To Play Two Players On GTA 5: The GTA 5 Review

David Huner
David Huner is a tech lover. After completing his graduation from the University Of Phoenix, he started gather his knowledge mostly on latest technologies that keeps his life smart and cool. Now he wants to spread his knowledge with people who loves technologies.
Previous article
What Is A Radio Network Controller? All About Cellular Networks
Next article
How To Find Adobe Serial Number On Mac

Today there are many models of gaming laptops and desktop computers with amazing features like high capacity SSDs and battery life etc. Most modern computers...