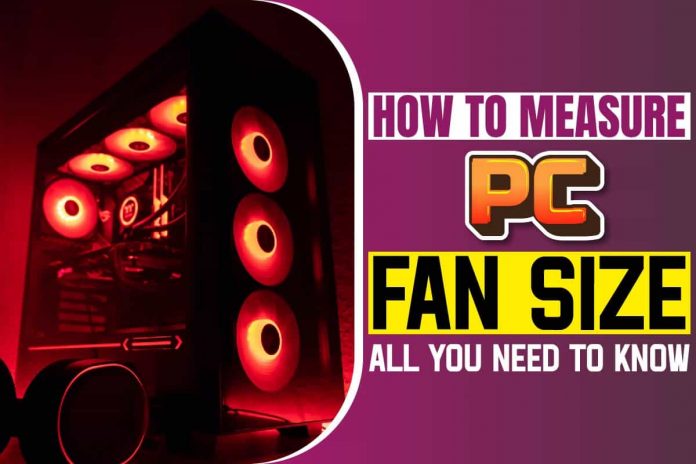 How To Measure PC Fan Size: All You Need To Know

The PC fan is any fan inside the computer that is attached to the computer fan. Its main function is active cooling.

The fan does this by drawing in cool from the outside and expelling warm air. It then pushes the cool air across a heat sink to cool a certain computer component.

The commonly used fans in computers are axial and centrifugal. The computer fans are mostly in standard sizes, which are 360mm, 240mm, 140mm, and 120mm (common).

People always want to know the sizes of their PC fans but do not know how to go about it. Measuring a computer fan is quite easy.

In this article, you will find a detailed guide that is so straightforward. Here is a quick answer to the question.

How to Measure PC Fan Size

As mentioned, measuring a PC fan size is quite straightforward. If you have the fan, measure it from edge to edge, and it should be horizontally (across).

Do not measure diagonally. Record the fan measurement in millimeters and not inches.

If you do not have the fan with you, do not worry. There’s a way you can go through with it. In this case, you will have to measure holes that are on the case that the fan mounts.

Like you did on the actual fan, you will have to measure horizontally. The only different thing you’ll do this time is measure from the center of one screw hole to the center of the other.

In addition, the easiest way to tell you PC fan size is by looking at the physical case the fan came in. It always has the dimensions and sizes written on it. But if it’s not a great option for you, then resort to measuring.

The computer fan sizes are in various sizes. The sizes start from 40 to 360mm. Since day one of PC building, the fans have been among the most important PC components.

Fans are found in the heatsink, graphic cards, and processor or the boxes. The main function of the fan is regulating temperature in our modern computers.

Because of its importance, you will certainly come across several varieties of computer case fan sizes. In this section, we have listed the different sizes of fans available for our modern Personal Computers.

The PC fan case sizes do have two dimensions. These are the diameter and width (thickness).

If you come across a fan dimension as 120mm by 25mm, it means the fan has a diameter of 120mm and a thickness of 25mm. Here are the different sizes of the computer fan case.

This fan model is conventional and has been in use for over a decade. Today they are still in use but not as common.

Mostly you will find it in certain CPU heatsinks. Some models of graphics cards use it.

The 80mm fan was very noisy when used in big computers. Today it is used in small models like Mini STX, HTPC, and many more.

Advancement in technology called for larger fans. The 92mm model, which was an improvement of the 80mm model, was released.

It does work with less RPM because of its size. However, the fan is still noisy except in certain computer brands.

The 92mm is mostly used in the heatsinks of some graphic cards. Of all the fan models, it’s the least used model except on some specific models.

The 120mm is the most common and standard fan case size. It was an improvement of both 80mm and 90mm.  The 120mm fan model is much more flexible than the old models and can be used in various components. It is also common in high-end computers.

The one thing that makes it a favorite is the fan allows enough airflow in the PC without producing much noise. It’s model-dependent and does rotate at a low RPM.

Today, the 140mm model is the second most popular computer fan case size. This model is certainly larger in size and a better substitute for the 120mm fans.

With this model, the airflow is a bit higher than the 120mm models. But its static pressure is less.

Any high-end fan needs to have a great static pressure or similar to the 120mm model. Manufacturers love the 140mm fans because their performance is close to that of the 120mm model.

They contain few keys up their sleeves, and this is another thing that makes many users love them. Its only limitation is that it is a bit expensive.

The fan is best for cabinet types such as Extended ATX Towers and Full Tower ATX supporting liquid cooling radiators.

This model is so rare. The manufacturers hardly produce them compatible with the full towers but not the various heatsink inside them.

They have a greater airflow compared to the previous models because of their size.

In general, they are used in computer models that need larger airflow. It, however, rotates at a relatively low RPM and has low static pressure.

The PC manufacturers always look for better fans. That will adequately cool down the various components in the PC.

Therefore many PCs do come with pre-built fans, which will offer you adequate cooling. But if you are reading this, I’m certain you are not impressed by the pre-built fan, or your fan is spoilt.

Do not worry. This section will learn about the important things you need to look into before purchasing a computer fan.

Speed is the one factor that should be considered when selecting a computer fan. In fans, the speed is measured in terms of RPM, which stands for Revolution per Minute.

It’s the number of times the fan makes a complete rotation in a minute. If the RPA is high, the fan will spin faster. This will certainly make the fan to be louder.

Converting it into wattages will have you multiply the maximum voltage the fan supports by the number of amps.

Fan noise can be so irritating. It can make working on your PC unbearable. So it’s something you should be keen on when buying it.

The noise should be at its minimum. Check out the various technical specifications of the fan. You will be able to learn whether it’s quiet or not. Also, check the decibel level, which is denoted as dBA.

It’s the most important factor. You should know your fan size before making a purchase. Or else you risk buying something too big or small.

Check the compatibility first. The standard fan size is 120mm, which is most common in modern computers.

The other sizes available are 200mm, 140mm, 92mm, and 80mm. However, you should note that the larger fans spin slower than the smaller fans while still offering the same amount of air to the PC. Mostly this lowers the fan noise level.

The three-pin fans do have three wires. For ground, power, and tach (passes information to the motherboard or software).

The three-pin fans are the most popular. The four-pin fans have a fourth and additional pin which facilitates PWM (Pulse Width Modulation) control.

It’s a type of control that allows the fan software and motherboard to adjust your fan speed.

The RGB fans are also referred to as LED fans. These types of fans always come with single or multiple colors that light in them.

The good thing about these fans is that they improve the visual appeal of your case.

The PC has many components that are not as important as the fan but quite expensive. However, the low price of the fan should not fool you.

It’s among the most important components of the PC. So, it would be best if you were keen when selecting the $20 fan. In case of any mistake, then your PC peak performance will be affected.

It will overheat and crash often. You might want to replace a spoilt fan, or maybe you want to reduce the noise level or improve airflow.

This section gives a buying guide that will help you choose your next PC fan case.

It is the number one case fan manufacturer. In this model, they have focused on perfection.

It does not feature the common classic brown and tan color. This model color is two-tone grey that perfectly blends.

Aside from the color, the NF-S12B redux-1200 is still very strong and can surely blow 59.2 cubic feet of air per minute. Plus, the noise level is quite low.

The fan is a component of the computer that is usually overlooked. Plus, many people are not interested in learning the great details about the fan and its dimensions.

There are other things you need to learn to be able to choose the best fan. In this article, we have given you all the useful information about the PC fan.

With all the new knowledge you’ve got from this article, you will be able to make the best decision.

How Much Does Water Cooling Cost: All You Need To Know

How To Play Two Players On GTA 5: The GTA 5 Review

David Huner
David Huner is a tech lover. After completing his graduation from the University Of Phoenix, he started gather his knowledge mostly on latest technologies that keeps his life smart and cool. Now he wants to spread his knowledge with people who loves technologies.
Previous article
Minecraft Base Ideas: The Best Ideas
Next article
How To Connect Matricom Controller To PC: Better Gaming