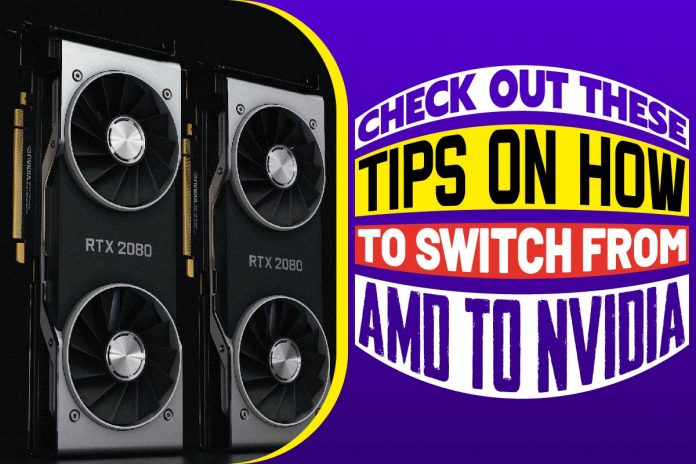 The GPU is the component that renders graphics on the computer. AMD and Nvidia are the world’s current top GPU manufacturers. They have been in fierce competition with each other for decades.

If your computer’s usage is basic, you may not be keen on your PC’s brand of GPU. For gamers, the AMD vs. Nvidia superiority debate remains an endless one.

Certain factors seem to put Nvidia ahead of the competition, and many AMD users have considered switching to Nvidia.

This article explains how you can change your computer’s GPU from AMD to Nvidia.

How To Switch From AMD To Nvidia

Uninstall everything about AMD:

To begin, uninstall the AMD drivers from your computer. Uninstalling AMD drivers before installing another graphics driver will help avoid file conflicts that can cause new driver installation to fail.

You can remove the graphics card by following the instructions below.

Remember also to store the graphics card in an antistatic bag. Antistatic accessories are available in any local computer store.

You can now slide your Nvidia graphics card into the empty slot. Clip or screw the graphics card to the mounting bracket as the case may be.

Reattach all detached cable connections to the GPU. Replace and fasten the lid cover and restart your computer.

Download graphics drivers from Nvidia’s official website. If you’re not certain which driver to install, Nvidia has created a useful tool to help you find the appropriate driver.

So, how do both GPU brands stand up to each other? We will examine the AMD vs. Nvidia war.

AMD, short for Advanced Micro Devices, is the world’s second-largest PC microprocessor maker, trailing only behind Intel. AMD began operations as far back as 1969, providing low-cost alternatives to Intel microprocessors.

Although AMD has been producing processors and CPUs since 1969, it entered the GPU industry in 2006 after acquiring ATI. ATI had been in the GPU business since 1985.

AMD GPUs have trailed competition since the acquisition due to inconsistency. However, AMD has made rapid progress with its new Radeon GPUs. AMD provides several solutions that compete well with Nvidia’s offerings if you’re looking to buy a GPU right now.

About AMD’s GPU – The Radeon

Radeon was originally an ATI brand. From the 1990s to the mid-2000s, ATI was Nvidia’s main competitor in the PC graphics market. AMD purchased ATI and its Radeon brand in 2006.

Nvidia began operations in 1993 to provide high-performance graphics cards. The founders had followed trends that indicated that the next wave of computers would be graphics-based.

They also observed that even though there was a huge market, video games were one of the most computationally difficult problems. Video games became the company’s springboard for reaching vast consumers.

Nvidia is also building a name in sectors other than PC graphics, most notably self-driving cars, and artificial intelligence.

While AMD is also active in the mobile and console sectors, Nvidia has been more daring with its non-graphics ventures, owing to its dominant position in the graphics market.

About Nvidia’s GPU – The GeForce

GT, GTX, and RTX are the different models for the GeForce GPUs.

If you want to design a PC for gaming, you’ll have to choose between the two most popular GPU makers. Here, we take a side-by-side look at both GPU brands regarding power, performance, features, software, and pricing to help potential buyers make informed choices.

Power and efficiency: Graphics cards now consume more power than ever before. Top models require between 110 – 270 Watts of power.

Under full load, a powerful graphics card uses as much power as the rest of the system. The GPU plays an important role in determining power use and efficiency.

Nvidia had the upper hand in power and efficiency until AMD released the Navi, providing fierce competition. Big Navi has even made efficiency much better, improving performance by 50%.

Nvidia’s Ampere, however, remains largely fast and powerful, although sacrificing some efficiency consequently.

Both brands continue to divide opinion in terms of power and efficiency. Many experts and enthusiasts currently consider them to be on the same level, and a few still believe Nvidia remains the clear winner.

Budget and performance: AMD’s lower-cost GPUs usually always surpassed Nvidia’s offerings at the same price point. When comparing the latest budget offers from both firms, though, Nvidia comes ahead marginally. Ironically, some of AMD’s older Polaris-based RX 500 cards are still the best buys if you’re on a budget, as they provide excellent value.

They could only come close to the GTX 1660 Super ($229), making it an undesirable card for consumers searching for the best value within this price range.

However, since Nvidia has yet to release the latest RTX 3000 and RX 6000 budget models, now is not the best time to create a budget gaming PC, especially if you want it to still be relevant in the future.

Gaming: Nvidia and AMD have been the only discrete GPU manufacturers left in the PC gaming market since the merger of ATI and AMD. AMD’s position in the CPU business is similar to Intel’s: they have a significantly smaller market share.

In terms of gaming, both firms have had significant roles in the console wars. The Xbox 360 and Nintendo Wii both have AMD graphics cards, while the PlayStation 3 has a modified Nvidia graphics card.

AMD has made unique APU/SoCs for both the PS4 and Xbox One in the current generation of consoles, while Nvidia has converted its SHIELD technology for use with the Nintendo Switch.

Software: Nvidia used to have a substantial lead in terms of overall software offerings. AMD always provides a matching feature for any Nvidia function.

There are still games with graphical effects exclusive to one of the two manufacturers. Nonetheless, these games have become considerably fewer over time due to poor public perception and perceived anti-competitive activity.

AMD And Nvidia: Is There A Winner?

Nvidia is the industry leader in graphics cards, with superior high-end graphics cards for enthusiasts and gamers. At present, the RTX 3090 is unbeatable, and even the earlier RTX Titan pales in comparison.

When it comes to value, AMD outperforms the competition by offering various options to suit a variety of low-end budgets. Many people want value for money. With the RX 580 and 570’s lower prices, you can build a great machine at a lesser cost.

There will always be a rivalry between AMD and Nvidia. AMD may be the underdog, but you should consider their products if they offer unbeatable solutions in your price range.

The GPU is the component that renders graphics on our computer. The superiority debate among users of top GPU makers – AMD and Nvidia – remains an endless affair. Many people still give the nod to Nvidia.

AMD users who want to switch their graphics cards to Nvidia can do so in a few simple steps. First, uninstall the AMD drivers on your computer. Next, replace the AMD graphics card in your computer with Nvidia and install Nvidia drivers.

Do You Need A Firestick For Each TV? Turning Your Standard TV Into A Smart TV

How To Tell If A Wi-Fi Card Is Bad: All You Need To Know About A Defective Wi-Fi Card

David Huner
David Huner is a tech lover. After completing his graduation from the University Of Phoenix, he started gather his knowledge mostly on latest technologies that keeps his life smart and cool. Now he wants to spread his knowledge with people who loves technologies.
Previous article
MSI Laptop Not Charging; Best Gaming Laptop Fixes
Next article
Is 200mbps Good For Gaming? Check Out The Response