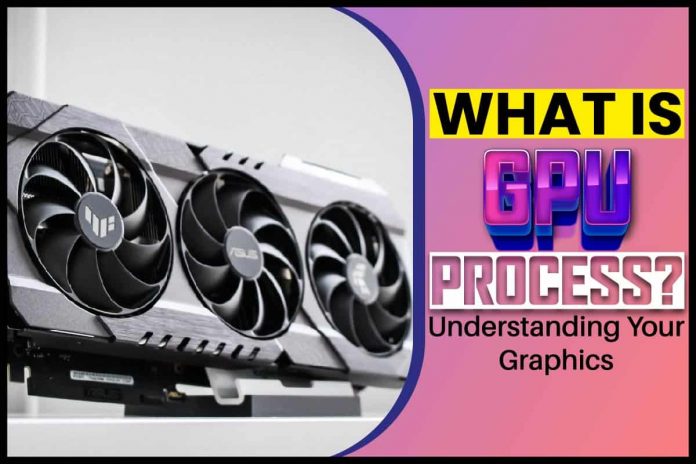 What Is GPU Process? Understanding Your Graphics

When picking out a new gaming PC, most of us look at the RAM and GPU before getting into other details.

The GPU is vital, especially in gaming, since it will determine how well your game gets rendered; thus, it dictates how much you will enjoy it.

But how much do you know about how your GPU works to process data and give you amazing videos? Let us get into the graphics unit and see the components along with how they work together to provide you with a good gaming experience;

What Is GPU Process?

First, it will increase efficiency since the GPU is designed to handle graphics. It will also free the CPU and focus on other processes that would make multitasking possible. This process is enabled by default, but it can hurt your memory, so you should disable it if your system performs sub-optimally.

Why Is Hardware Acceleration Necessary??

Hardware acceleration uses your PC processing power to boost the performance of gaming or browsing applications.

You need to understand why this process matters and how it affects the working of your applications.

You must have seen the hardware acceleration option in an app. You might have needed to disable or enable it to change the performance of your device. If you have a powerful CPU, this is not a process you need to worry about.

When the CPU is overwhelmed, it can pass some of the load to specialized systems. For instance, the CPU can use the sound cards to process sound from browsers or videos to give better audio output.

Graphics cards can also be used to produce better quality video playback in movies and games. Graphics cards are better and faster at handling physics and mathematical calculations, making them more efficient than CPUs.

The CPU alone can do anything the GPU or sound card can do, but allowing other components to do the job is a better choice. This leaves the CPU with space to deal with tasks that other parts cannot process.

Additionally, if you have cooling issues in your PC, the components might overheat and cause a drop in all the PC’s processing activities. This might cause more problems that you would not get if you disabled hardware acceleration.

This could also be a problem when the drivers cannot run as comfortably with the CPU as with the components. This will cause your entire system to slow down, and there will be more performance lags.

What Is Inside Your Graphics Card?

Most people understand why graphics cards are essential but do you know how it works to give you the results you enjoy from it. Let us break down its components and help you understand how a graphics card works;

When you look at the graphics card, you will notice the huge fans in a metal casing. You will realize that most of the case is dedicated to cooling; why is this so?

This is not our primary concern, although it is crucial. We are more interested in the other internal components.

The PCB is the most interesting part. This is a Printed circuit board with a large span of conductors, and electrical components edged onto a substrate. When you peel back the thermal pad, the most apparent element you will see is the GPU.

The Graphics processing unit has millions of cores that help it in dealing with graphics. The cores come together to perform a bulkier data load than a CPU can handle in optimal performance, but they can only handle one linear task.

The next thing you will see is VRAM which is next to the GPU. When the GPU processes large amounts of data, you need to have that information availed to your computer.

You can’t have the graphics processed then not displayed anywhere since it defeats the purpose of processing.

Video RAM, therefore, stores all the processed data to make it available for your computer to display.

Having specific RAM for the graphics will allow the card to send its data to the computer since it has already been computed.

The GPU also has a voltage regulator module. This is a component that controls the electricity that comes into your GPU. The processor is small and sensitive, which means it can get fried by electrical surges.

If there is power starvation, the processor will not work as it should; thus, it needs to balance the power supply.

These are the most necessary components, and a graphics card cannot work without all of them present.

We look at computer specs and their performance; you couldn’t know how these specs affect how your computer handles video games.

It feels like the names could tell you the difference between graphics and center, but they have significant differences.

The best game run has it with 60 frames each second. This means that an image has to be generated 60 times each second to show you what is going on in the game. Rendered objects must have some physics or AI algorithm that dictates how they work.

The physics and visuals come together to give you the game and motion you see on the screen. The GPU handles lighting, the position of objects, textures, shades, and other aspects that deal with visuals.

The number of polygons that your screen can display depends on the kind of GPU you have. The graphics card also dictates the resolution and texture of any objects that will appear on your screen.

The graphics card handles numerous features that can be controlled by software, but it does it better. This means that the GPU does the artistic work in the processing and rendering of video in games.

The CPU, on the other hand, does the organizational work in the game. There is no such thing as an image if there is nothing in the picture. Objects in computers are made of polygons which are made of faces and vertices.

You can manipulate an object to move by moving the vertices, and the CPU executes this task. The CPU is also responsible for tracking the game logic and ensuring that your game runs as it should.

It will generate the particle systems, and then the GPU will process and render these systems as images.

It will also calculate and handle the physics of how the objects in your game react to each other with the game’s logic.

You won’t have a working system if you have a high-end GPU that can handle all the graphics and a bad CPU.

The CPU will be unable to keep up with the GPU, which will make the GPU underperform, or it will cause your system to crash.

Recently, the two components are getting built into each other. Some GPUs can do matrix and vector computations that a CPU would otherwise do. These will make each of these systems more capable and improve the user experience.

GPUs are generally faster than CPUs, pushing engineers to look for a broader range of GPU usage. Some of these uses include mining cryptocurrency along with using GPUs in deep learning neural networks.

The GPU is suitable for specific operations since it handles data in a linear form. On the other hand, CPUs can do many random tasks, often simultaneously, making them a good choice for PCs and mobile devices.

Chrome uses a GPU process to optimize its performance. This is what makes chrome work as well as it does and stand out from other browsers you use.

This feature also releases your CPU and makes it work better with other processes that would have slowed it down.

GPUs and CPUs are built to work together. A CPU generates data and does the calculation while a GPU processes the visuals.

These two come together to produce the motion, graphics, logical shooting, and impacts you see in a video game.

How To Make Steam Games Open On A Second Monitor: The Gaming World

David Huner
David Huner is a tech lover. After completing his graduation from the University Of Phoenix, he started gather his knowledge mostly on latest technologies that keeps his life smart and cool. Now he wants to spread his knowledge with people who loves technologies.
Previous articleHow To Find Adobe Serial Number On Mac
Next articleHow Much Data Does Roku Use? Your Streaming Data Costs

How to Optimize Your App for Business?

What Is The Purpose Of Graphic Overlays?