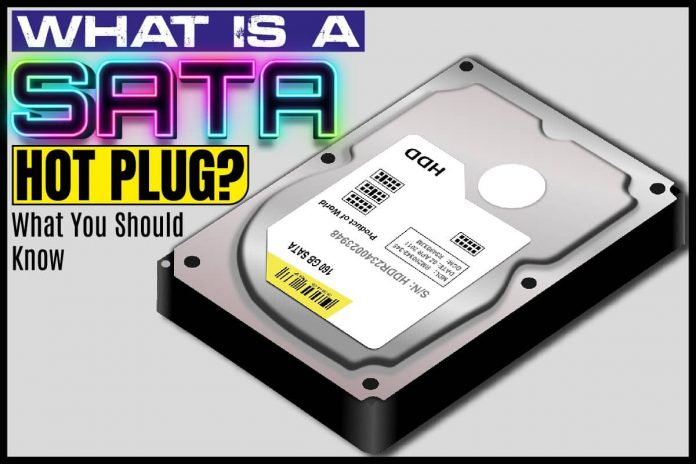 What Is A SATA Hot Plug? What You Should Know

When using your computer, you are likely to add one or even remove a component to process information or add functionality. For some devices, you don’t need to restart your system to either add or remove them.

Any device or component that you can add to your computer without disrupting its operation is a hot plug. The opposite is a cold plug, which requires restarting the system. Hot plugs make for more convenient computer usage. They are available in different forms for different purposes.

What Is A SATA Hot Plug?

A SATA hot plug refers to any hot plugging device connecting to storage devices like optical disks and hard drives with SATA-certified interfaces.

SATA drives themselves are hot-pluggable because you can remove them and replace them without turning off your computer. They can also connect to other SATA-compatible external devices like external drives and adaptors for added functionality.

Compatible external hard drives (also called eSATA) connect to the computer via the eSATA port at the rear of the computer near the USB, monitor, and network cables ports.

A wide range of adapters is available for different purposes. You can use them to modify connections between SATA devices. You can also use them to wipe, explore or back up information on SATA drives, in the case of USB adapters.

You can also use Molex adapters if your power source lacks the 15-pin cable connection required by your internal SATA hard drive.

SATA cables are flat and slender 7-pin cables. The one end connects to a SATA port on the motherboard, and the other to the back of a storage device such as a SATA-certified hard drive.

Every computer system has a motherboard – a printed circuit board that connects all other components, allowing them to communicate.

For this communication to occur, these drives or peripherals must first transmit data to the motherboard. The data transmission occurs via interfaces in the form of high-speed cables. The technical name for the interface is Advanced Technology Attachment (ATA).

However, a serial interface or the Serial Advanced Technology Attachment (SATA) uses one cable to transfer information bit by bit. Rather than transmitting data in multiple concurrent streams, serial communication sends data one bit at a time.

As a result, serial communication is less prone to interference, allowing SATA to run significantly faster than PATA (Parallel ATA)

Serial ATA is far superior to the older IDE and Parallel ATA connections due to the following factors:

The SATA has a less complicated interface since it requires thinner wires. It also uses fewer wires, allowing for even more airflow within the cabinet.

SATA drives allow users to remove drives from a computer without having to turn it off, offering an overall smooth experience.

Because a motherboard has several SATA ports, you can use many drives simultaneously.

SATA connections have separate cables for each drive. Since these drivers do not share the same connections, there are no speed issues.

SATA drives are less power-consuming than PATA. This property makes them popular in portable devices like laptops.

Because each SATA drive has its wire, connecting several drives will require more cables. This situation creates a problem for workstations and users who need to use many storage devices on their PC.

Most of the older computers support PATA connections. However, only modern systems support SATA.

History And Evolution Of SATA Drives

Here’s a timeline of the evolution of SATA hard drives, with their features and improvements.

The first revision of SATA came in 2003. Its devices were capable of transmitting data at a rate of 1.5 gigabits per second. SATA 1.0 devices, consisting of two PATA drives coupled in a master/slave configuration, were prominent in home and business computers.

SATA 2.0 came in 2004 with the introduction of the Native Command Queuing (NCQ). The NCQ feature enables the drive to send write/read commands at random intervals, ensuring the optimal movement of the reading head.

Revision 3.1 is a transitional revision that emerged in 2011. It introduced final design requirements for SATA Universal Storage Module for consumer-based portage storage applications.

The following features highlighted the important changes in the 3.1 revision.

mSATA:This refers to the serial communication interface for solid-state drives in mobile devices. It is a PCI Express Mini Card-like connector, which is electrically SATA. An mSATA SSD is a smaller version of the regular SSD and is prominent in portable devices such as tablets, netbooks, and laptops.

Universal Storage Module (USM): This is a new type of cable-less plug-in (slot) powered storage for any consumer electronics device. The USM enables developers to incorporate slots into computers, including other devices.

Released in August 2013, this revision presented the SATA Express (SATAe). It supports the real-time use of SATA ports and PCI Express (PCIe) lanes, making it possible for legacy SATA and PCI Express storage devices to function together.

Released in February 2016, this revision introduced the following features:

This feature provides a 25 percent or more increase in hard disk drive capacity using overlapping tracks on the media.

Power disabling feature: Remote power cycling of SATA drives is possible with this functionality. Also included is a Rebuild Assist feature that aids in the rebuilding process to reduce data center maintenance.

Transmitter emphasis specification: In data transmission, emphasis has different applications. Pre-emphasis and de-emphasis are the two ways in which a system regulates data input and output.

Pre-emphasis increases refer to the boosting of the input data range. The reverse occurs in de-emphasis. In serial data transmission, de-emphasis reduces the level of all bits except the first one after a transition.

The 3.3 revision improves data transmission and reliability between hosts and devices in electrically difficult environments.

Serial Advanced Technology Attachment (SATA) is a data transfer interface that allows storage components to communicate with the motherboard.

SATA drives are hot-pluggable themselves as you can remove and replace them without turning off your computer. They can also link to other SATA-compatible external devices like external drives and adaptors for added functionality.

SATA is the predecessor to PATA (Parallel ATA). Serial ATA replaced Parallel ATA in 2001 to become the standard storage interface.

The Laptop Makes A Rattling Noise When Tilted. All You Need To Know

Why Does My Bluetooth Speaker Keep Beeping? The Bluetooth Technology

The Laptop Only Charges When Turned Off— Understanding The Laptop

David Huner
David Huner is a tech lover. After completing his graduation from the University Of Phoenix, he started gather his knowledge mostly on latest technologies that keeps his life smart and cool. Now he wants to spread his knowledge with people who loves technologies.
Previous article
What Is A Class 2 Power Supply? Understanding Power Supply
Next article
Check Out How Fast Is 30 Mbps? Everything Explained