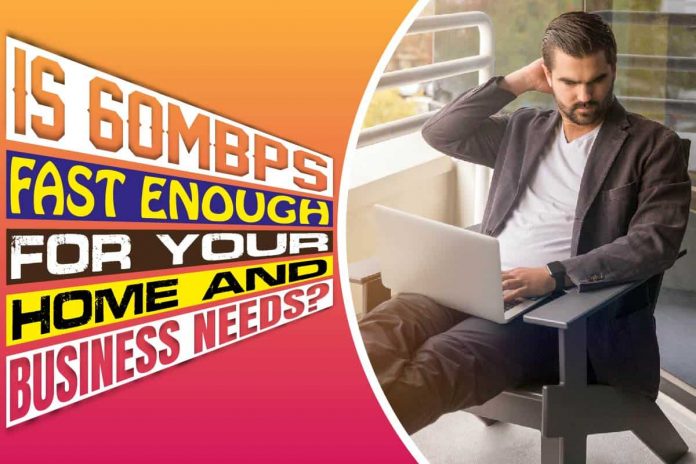 Is 60 Mbps Fast Enough For Your Home And Business Needs?

The megabits per second (Mbps), measures a network’s bandwidth which is essentially its data transmission capacity within a given time.

Many people confuse bandwidth with speed. And this misunderstanding could be partly attributable to ads by internet service providers (ISPs) that mix both by alluding to higher internet speeds when they imply bandwidth.

While speed and bandwidth are not synonymous, you need more bandwidth to maintain acceptable speed across numerous devices. So, internet speed becomes a question of the number of connected devices and usage.

Now, let’s look at the question.

For most people, a 60 Mbps internet connection is sufficient. In terms of download speed, the FCC considers anything above 25 Mbps as high-speed internet.

Web surfing and social media activities should occur seamlessly on your computer or mobile device at this bandwidth. You can also stream videos and play online games.

However, you may want to consider upgrading to a higher bandwidth if you have many devices using your network simultaneously.

We measure broadband speeds in megabits per second (Mbps). Megabits are equal to millions of bits. The greater the number of Mbps you have the faster your internet would be. In the United States, the average internet speed available is roughly 100 Mbps.

The speed will be higher in locations having fibre lines. Because rural areas rely on satellites, 25 Mbps is the standard speed.

However, your level of internet usage and the number of people using the same network in your home are the two most significant factors that affect internet speed.

Let us consider the broadband requirements of the most common activities of most Internet users and see whether 60 Mbps is fast enough or not.

We’ve provided specific examples of game genres as well as the required minimum internet speed, so you can get a better idea of what you’ll need.

This is one of the most popular game genres on the internet. FPS games, unlike any other genre, demand the shooters to provide consistent input.

First-person shooters require relatively high download speeds to enjoy a satisfying gaming experience. However, you can play FPS games smoothly with a connection speed of 60 Mbps.

Playing RTS games is a lot of fun. Few things are more fulfilling than assembling vast armies and just wiping out your opponents with a single mouse click.

Although a PC can play a real-time strategy game with a continually changing game state, an Xbox 360 can help you make the most of slower internet speeds and latency rates. As you can see, 60 Mbps is more than plenty for a game like Warcraft 3 to run well.

You would need at least a download speed of 3 Mbps and an upload speed of 1 Mbps to play an RTS game like Warcraft.

RPGs first emerged in the 1970s, when developers first created the game for mainframe computers, popular in colleges. Since then, the genre has progressed, and in recent years, countless outstanding RPG games have emerged from monster-slaying, remakes of popular titles, and other worlds that are explorable through diverse ideas.

With a 60 Mbps connection, you have enough to enjoy a great RPG experience. A game like Mass Effect requires a tiny average download speed of 2 Mbps and upload speed of 1 Mbps.

Hundreds, if not thousands, of gamers, can be online simultaneously in a single MMO game. Players can work together or fight in large groups in this type of game.

In contrast to an FPS game, this type of game does not require a high level of download speed. For this game, a 60 Mbps internet connection would be excessive.

Game designers have done an excellent job of making these games more efficient, to the point where you can play them rather well, even with a dial-up connection.  However, you will need a faster internet speed for a large team fight, as 1 Mbps may be too slow.

On average, an MMO game requires 3–5 Mbps of download speed and 1 Mbps of upload speed. With 60 Mbps, you have more than enough.

We cannot stress enough how the number of devices using your network simultaneously also affects how fast your connection will be.

The number of devices or individuals connected to the internet in your home also affects how enjoyable Netflix binge-watching might be. Netflix recommends a minimum connection speed of 5 Mbps for standard definition videos.

Hulu’s streaming service has minimum internet speed requirements that are identical to Netflix’s. A 3Mbps connection is required to watch any HD shows from the Hulu streaming repertoire. For live streaming, a minimum of 8Mbps is adequate. You’ll have more than enough bandwidth for this service with 60Mbps.

You’ll need an internet connection speed of 1.5Mbps for standard definition and 3.0Mbps for a high-definition to stream movies or shows on Roku, both of which are comfortably under the 50Mbps speed limit.

You’ll need 900Kbps for standard definition and 3.5Mbps for a high-definition to stream content on Amazon Prime.

The standards for YouTube TV are more complicated. You’ll need at least 3Mbps to broadcast a standard definition video. If you are the only user on the network, HD streaming requires a minimum of 7Mbps, and 13Mbps if other devices are connected.

These recommendations ignore the fact that you may be streaming content while engaging in other online activities. You might want to acquire a higher Mbps package if you prefer to watch TV while doing other things like uploading files or playing games.

The term “4K” or ultra-high-definition (UHD) refers to a screen with 8 million pixels. The implication is that the quality of what you see on the screen should be four times greater or crisper than standard HD resolution.

You’ll notice the sharp details of an actor’s facial features like colour and eye. Streaming services recommend between 16 – 25 Mbps internet for this level of quality.

Hulu, for instance, requires 16 Mbps to stream content in UHD, while Netflix requires a minimum of 25 Mbps. There’s no officially stated minimum requirement for Amazon Prime, but the general perception is that it has similar broadband needs with Netflix.

How Many Devices Can 60 Mbps Internet Speed Support?

The number of devices or simultaneous users has a significant impact on the speed of your internet connection.

A 60 Mbps internet connection will feel fast if you are alone in your home, but if you have ten members of your family sharing the connection simultaneously, you will have a problem.

It depends entirely on what the devices are doing. It’s unlikely that ten devices streaming YouTube videos at the same time would be successful. However, you should be alright if you have a few phones, a laptop or two, and a smart TV that all use Wi-Fi at different times.

So, six to eight devices cannot for simple tasks like web surfing, playing games and streaming online content in SD or HD. However, if you’re streaming 4K videos, you’ll need to either reduce the number of connected devices or upgrade your package.

Where You Need More Than 60 Mbps

If you want to stream more than 4k on multiple devices, then you’ll need more than a 60 Mbps connection. For most streaming services, 4k streaming requires a minimum speed of 25Mbps and is one the most data-intensive activity for a broadband connection.

An office typically uses the internet to send emails, pay bills and hold video conferencing. With four employees, 60 Mbps will be sufficient.

However, If you run a large office with more than ten employees, you will also require more than a 60 Mbps connection to have a seamless operation.

A 60 Mbps internet connection will provide you with fast connection speed, especially if you are the only one connected to your network.

With this, you can meet the recommended minimum download speed needed for online activities like gaming and streaming TV content.  However, this connection will be noticeably slow to perform several online tasks like large file uploads.

If you have numerous people in your house trying to access the internet simultaneously, you will need the additional speed if you notice lag. In this case, consider upgrading to a higher plan.

How To Connect Matricom Controller To PC: Better Gaming

How To Find Out Who Sent You An Amazon Packag

How To Use A Coax Splitter

David Huner
David Huner is a tech lover. After completing his graduation from the University Of Phoenix, he started gather his knowledge mostly on latest technologies that keeps his life smart and cool. Now he wants to spread his knowledge with people who loves technologies.
Previous article
How To Adjust Vacuum Advance On HEI Distributor: Everything You Need To Know About Vacuum Advance On HEI Distributor
Next article
Can You Hook Up An Ethernet Cable In A Phone Jack? The Ethernet Connection